I’ve often overlooked the fact that makeup, as a skill for many women, doesn’t come easily.  I mean this not in a condescending way, but what I’m saying is that I take for granted the fact that I’ve been seriously messing around with the stuff since early middle school.  And that I read all of Kevyn Aucoin’s books cover-to-cover as a freshman in high school, and have since read literally countless amounts of information on makeup through blogs, books, and magazines during college and beyond.  I’ll sometimes have friends or acquaintances ask me a question or two on how to apply concealer, or what shade of lipstick they should look for, and in a moment of complete ignorance I’ll think to myself, “They … they don’t already know this?”  Stupid, I know.  I should also probably remember that people are busy with other things besides makeup, and I should be grateful that I’m even thought of as a source of helpful information at all.

One common area of interest that I’ve encountered in many of my friends or acquaintances is the question of what color eyeshadow to use on their eyes. Now, you may have seen those Almay i-intense eyeshadow kits at the drugstore tailored specifically for each eye color, but in my humble opinion I think they suck.  I don’t find them user-friendly (as you have to understand how to apply the three colors for proper contrast, etc.), and I’m totally not into the color combinations offered.  Blue eyeshadow is a tough sell to blue-eyed folks considering they’re typically told from day one to not wear blue eyeshadow, and who wants to be limited to three shades anyhow?  Especially when they’re meant to be worn together?

So, I wanted to share an article with you that I’ve had saved in an issue of People StyleWatch from October of 2007.  It’s a feature on the most flattering shadow shades for every eye color, and you only need to worry about wearing one at a time.  There are even recommendations on specific shadows to buy and try.  It’s by far one of the most useful articles I’ve ever encountered in a magazine.  I realize I save every issue of People StyleWatch (and am running out of places to put them), but I have to encourage you that if you’re ever feeling you lack a certain degree of aptitude regarding makeup, browse through some magazines!  I know you may not find an answer to your particular question immediately, but seriously- get off Pinterest and give print magazines a chance!  This coming February issue of InStyle features a full how-to article on contouring.  Contouring!  That’s some advanced stuff there that even I’ve yet to get a good grip on!  Don’t take the easy way out and Google it.  Go the paper route!  Anyhow, here’s our first page for brown eyes:

As someone who has brown eyes, I have to confess that I’ve loved their neutrality because it’s enabled me to use pretty much any shade of eyeshadow I like.  PSW suggests using champagne and gold, intense greens and purples, and rich, smoky gray for the best results on brown eyes.  These are, indeed, all extremely flattering choices.  However, another great method for figuring out the best shadows to use on your eyes is checking out the color wheel and figuring out what the opposite of your eye color is (identify your eye color on the wheel and your opposite is whatever’s directly across from it).  The opposite hue of your natural eye color is typically a very complimentary choice.  Now, there isn’t exactly an opposite of brown, because it isn’t on the color wheel.  But in most brown eyes there tends to be found quite a bit of yellow, and the opposite of yellow is purple.  So, I often like to add my own recommendation for brown-eyed folks and suggest trying navy or even electric shades of blue, as they’re somewhat near the purple family.  You’ll see these appear later as a good choice for hazel eyes.

Here’s our section for blue eyes.  Now, you may notice the options tend to just range within different shades of brown, but this is because brown tends to have some yellow in it, which contrasts quite well with blue.  Additionally, other colors tend to clash with blue eyes because they aren’t as neutral, but don’t get discouraged.  The article suggests gunmetal gray, golden rose, and pretty much any shade of brown will look great.  Again, most anyone can pull off any color if you consult a professional and find the right shade, but these will be the most flattering options for you.  Additionally, if you’re feeling bold, try a subtle shade of orange shadow as orange is blue’s direct opposite. 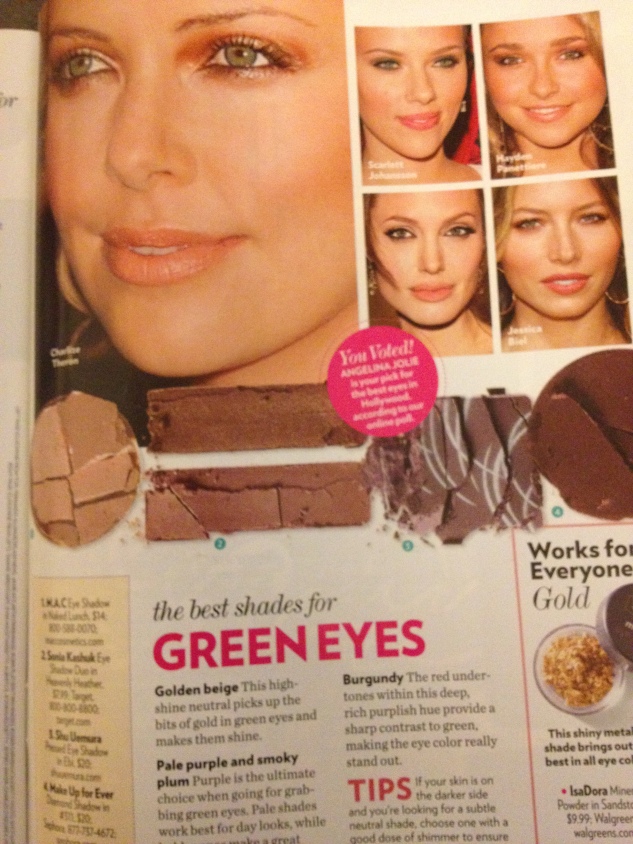 I love doing makeup on green eyes because the opposite of green is violet-red, which tends to manifest as purple when it comes to eyeshadow.  I love me a smoky eggplant-hued eye.  PSW suggests golden beige, pale purple and smoky plum, and burgundy for your more dramatic occasions.  There are a number of incredible shades of purple shadow that MAC features, including Sketch and Embark, which is more of a deep brown with plum undertones.  Oh, and note the color suggestion made for everyone on the right- gold.  And yes, I concur that this is true.

I love the options that hazel eyes have.  I’ve often felt that too many people shy away from navy blue shadow (and if you’ve got brown eyes, you should be working it!), so please just know that if you’ve got hazel eyes it’ll look awesome.  Tawny pink (think more of a warm shade as opposed to baby pink), dusty violet, and gray-blue and navy are all suggested for hazel eyes.  If you’re going for a smoky look (and this is the case for most all eye colors), playing around with hues other than black can bring some amazing results.  I’ve been forgoing my common black-brown shadows lately in favor of a deep navy, and I’ve been loving it.

Let me know of any other questions you may have regarding shadow, or any recommendations you may like on a color to purchase.  I’ve got oodles of know-how for you!  And I promise to not snap at you for not doing your own research.  That would be far too Christian Bale of me.  xo, MR