So, I’d say last night turned out well. I’ve never watched the Academy Awards from start to finish, red carpet to curtain closed, and I feel very satisfied with my experience. I first feel the need to give major props to Ellen DeGeneres as perhaps the only person having any business as an Oscar host ever again. Can she just do it every year? Please? I need to see Kevin Spacey handing out paper plates to the Hollywood elite again. Or can we at least compromise with a guarantee that Seth McFarlane will never, ever come back?

But let’s face it- The only reason that I really started watching the Academy Awards to begin with was for the styling. I can’t just say the gowns because there’s so much thought put into an entire look. Everything worn to the Oscars comes from a strategic plan: the jewels, the shade of lipstick, the dress, the tan or lack-of-tan, everything. And so when I choose my favorite looks, I’m choosing whole packages. Oh, and one thing that makes the Academy Awards personally exhausting for myself is the fact that the red carpet is honestly about one-third of all the show-stopping looks that will be seen throughout the night. It’s the Oscars after parties that have all the guests changing into something usually more playful, and that also bring out all the you’re-not-invited-to-the-main-thing-but-you’re-still-hip-enough-to-be-seen-here-people. The “Best Dressed” list can get a whole lot longer after the actual show is finished. Just sayin’.

Alright, so let’s get to it.

Yeah. Duh. She can do no wrong. But seriously, Charlize just gets it right every time. It may be the fact that her FACE just gets it right every time, but there’s just no denying that Charlize carries the red carpet in gowns that are nothing short of magnificent. The sheer overlay on the skirt of this Christian Dior haute couture gown adds such an ethereal, fantasy-like element, and the neckline is feminine and powerful with just a single necklace (not that there’s anything shy about that rock she’s wearing!) accessorizing the whole picture. The makeup and hair are just elegant enough to look sleek on Charlize (not too much eyeliner!), but without competing with the gown. This was the look that had me squealing.

Naomi Watts’ gown by Francisco Costa for Calvin Klein Collection was good enough on its own with its modest neckline, alluring slit up the side, snow-like texture, and slightly bold shoulders, but again, it’s the whole picture that makes me fall in love. The extras of Naomi’s look include: a metallic, graphic Bulgari minaudiere clutch with a “Serpenti” closure (meaning the clasp looks like a snake!), strappy black sandals, sleek, modern hair, red lips and painted toes, and beautiful, bold jewel designs adorning her wrist and neckline. There are so many little details that make this single look a work of styling art, and I feel that if I had to choose one head-to-toe look to wear myself to the Oscars, I’d choose this one.

I’ve been following Lupita Nyong’O on Instagram for a couple months now, and she’d been on my radar since October when 12 Years A Slave premiered. I’m not one for trying to predict how other people feel, but I feel I could wager a guess that these past couple months have felt like something out of a dream for this girl. She’s worked hard for a career in acting and theatre (Yale School of Acting!), she’s emerged as a fashion and beauty darling with a front row seat at New York Fashion Week and designers clamoring to dress her, and the day before she was given an Oscar for Best Supporting Actress for her work … she celebrated her birthday. I mean, what a ride, right? And so, this beautiful baby blue Prada gown, reminiscent of Cinderella (and Nairobi, in her own words, where she grew up around a lot of blue), just seemed perfect for the moment. The way it twirls, the way it seemed youthful and princess-like, and the way she worn the dainty headband almost like a delicate crown … glorious. I also love that the makeup wasn’t anywhere near as bold as other looks she’s previously gone with; it wouldn’t have worked with this look. Some have felt this dress needed a necklace, or that the headband was a bit “twee”, but I found it unique and delightful that the obvious choice of a necklace (or diamonds at all) was forgone in favor of something different. Lupita’s face was able to take center-stage, and she got to walk around in a sparkly Nairobian waterfall all night. Bravo.

In case you hadn’t noticed, I have a thing for eyeliner. And Olivia was WEARING IT. Makeup like this is my very favorite: emphasis on the eyes, some great false lashes, a touch of peach on the cheeks, and a nude lip. And the up-do was so not-up-do-ish. It was soft with face-framing pieces, with just enough volume. Nothing crazy, with an illusion of effortlessness. But then there was this … 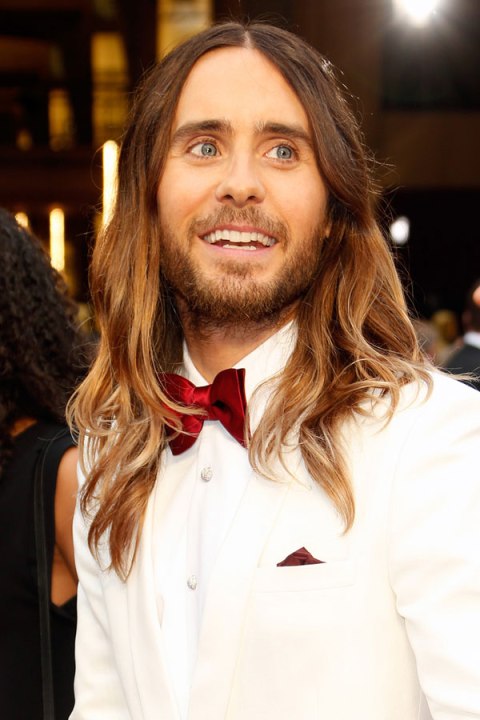 Yes, I’m blogging about my obsession over Jared Leto’s hair without batting an eyelash. I’ll admit that I’d been hoping for a more polished man-bun for the Academy Awards, but the flowing, ombre’d locks of a caucasian Jesus are just alright with me. I’ve just got to find out what conditioner this guy uses. He literally has my dream hair. Well, perhaps my dream hair is a bit longer, but seriously, for about five months now Jared has been rocking THEE hair that I’ve wanted for years. But hey! I think I’m finally there!

I hope he sees this. I really hope he does.

Best Dresses That You Didn’t See at the After Parties 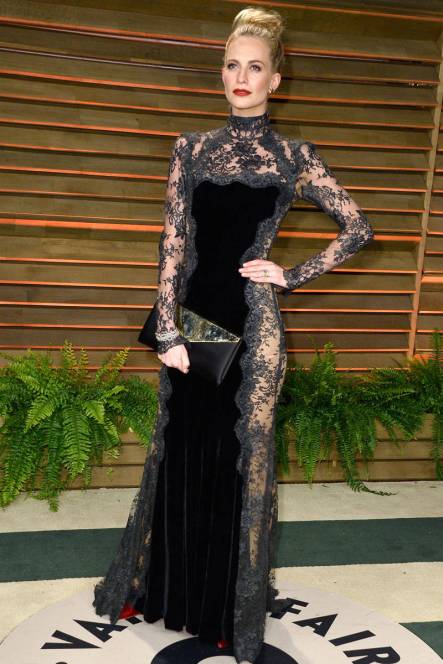 I’ve come to the conclusion that I love weird, lacey things. For instance, this. And this. And yes, I’m determined to see this happen on people other than Kristen Stewart, and so this lovely Valentino creation on Diane Kruger was exciting to behold along with Poppy Delevingne in Chanel. Dark and romantic, just perfect. I also love the length of Diane’s gown; it feels so breezy and un-stuffy. Black lace can veer into old lady territory, and the cut of her particular version keeps it from doing so.

And now, because I can’t bear to discuss them all in detail, enjoy some brief comments on the other looks that the internet is a-buzz about:

Jennifer Lawrence – The dress and jewels were stunning; the styling of the hair made her look much older than necessary. Her hair honestly ruined the whole look for me. Supremely frustrating.

Kate Hudson – Gorgeous, yes. But too reminiscent of Gwyneth Paltrow’s Tom Ford perfection from last year’s awards, for my taste.

Cate Blanchett – Beautiful, but honestly, just not exciting enough for me. I think I just wanted to see color on her really badly.

Kerry Washington – Pretty! By far her best look during this awards season. I haven’t been happy with how designers have dressed Kerry’s bump these past couple months, and if Jason Wu had to basically just take a plum bedsheet and drape it around her to one-up all the designers who’ve tried, then more power to him. Kerry’s hair, I will also add, was beautiful.

Amy Adams and Sandra Bullock – I was bored. Sorry.

Jessica Biel – Amazing, and that HAIR. SHEESH. But I feel like I always drool over her so I’m trying to give it a break.

Angelina Jolie – It’s hard to make her look bad, but the cut of her Elie Saab gown looked a bit matronly on her. That was one problem a few ladies seemed to have last night; some folks looked older than they should have.

And there it is! Of course, I’m always curious to hear your own thoughts and I would absolutely love to know how you felt about the red carpet (and the after carpet!), so please, leave a comment or two. Alright alright alright, that’s it for now. xo,MR

** Absolutely none of these photos belong to me or were taken by me, save for the one Instagram image (which contains an image that does not belong to me either).