I have used a lot of fragrances in my lifetime. Those folks that have their “signature scent” and can stick to just one fragrance … yeah, I don’t get them. I wish I could do that, but I’m a smell-aholic. Or a smell-ophrenic. Or whatever.

I remember Roxy’s Hula being the scent of ‘hot female’ in middle school. Seriously, girl walks by on campus and you smell the Hula on her … you got jealous. The guys thought she was a babe and she’d probably blazed passed all us other girls in the puberty department. In other words, she was a true woman, tube top and all. I tried wearing Hula in middle school … it just didn’t work the same. I just couldn’t understand why no one wanted me as I stood there covered in my butterfly clips and wearing my Osh-Kosh holdovers from fourth grade (yes, things fit me for a very long time) on the black-top. As I picked my nose.

And then came high school, and I don’t quite remember what scents I wore then because all I can remember as far as the olfactory sensations go is a haze of fruit. That’s when you discovered Bath and Body Works and boy, did we all go to town. We were all trying to discover our inner sexiness, and apparently ‘sexy’ in high school smells like being shoved head-first into a can of fruit cocktail laced with sugar, marinaded in sugar, and paired with … hmm, brown sugar and Fruit Loops? Heck, my senior year I even started wearing a perfume called Pink Sugar. Man, that was the stuff. That’s the first scent I remember wearing and feeling like it was mine. I wore it strictly throughout my senior year, and was thus able to associate it with all the memories that came with those days. Even when I get a whiff of that stuff these days, Aquolina Pink Sugar is a potent memory-trigger.

Throughout college and up until today, I’ve had a hard time nailing down a favorite fragrance. I can’t pick just one. If I go to Sephora, I smell twenty and I like them all. I like the weird ones, the overly-saccharine ones, the musky, masculine ones, and the lighter, clean ones. I’m just as happy to smell like a forest as I am to smell like a Funfetti cake. And so, I’ve acquired a few over the years.

The Givenchy one (pronounced zhe-von-SHEE, to the best of my description) on the right is one I fell for as a result of … shocker … advertising. Uma Thurman was the model used for the Ange ou Demon Le Secret ads, and I smelled it in a magazine and couldn’t get over it. I’d never appreciated a scent that was more founded in tea notes rather than fruit notes, as this one is. I think of a blush wine mixed with white tea; it’s unique. The gold bottle, Gucci Guilty, I can’t say I really love. It’s a floral-oriental but it’s a bit too “rich, daring, powerful woman’ for me … and I am a poor, cautious, hesitant woman.

The D&G L’Imperatrice is a friend-favorite. It’s inspired some purchasing among my acquaintances (more on that in a minute), and I will say that it is pretty delicious. It’s lighter because it’s an eau de toilette (not an eau de parfum), but it still has plenty of fruity notes such as watermelon and kiwi accord. Giorgio Armani Acqua di Gioia is my newest, and it reminds me of the water. It’s a scent that makes me fantasize about places I’ve never been, places that are misty, cool, and clean. Rather than the beach, which one may usually think of with such a zesty fragrance, I think of the fjords in Norway. No joke. Calgon take me away!!!!!! 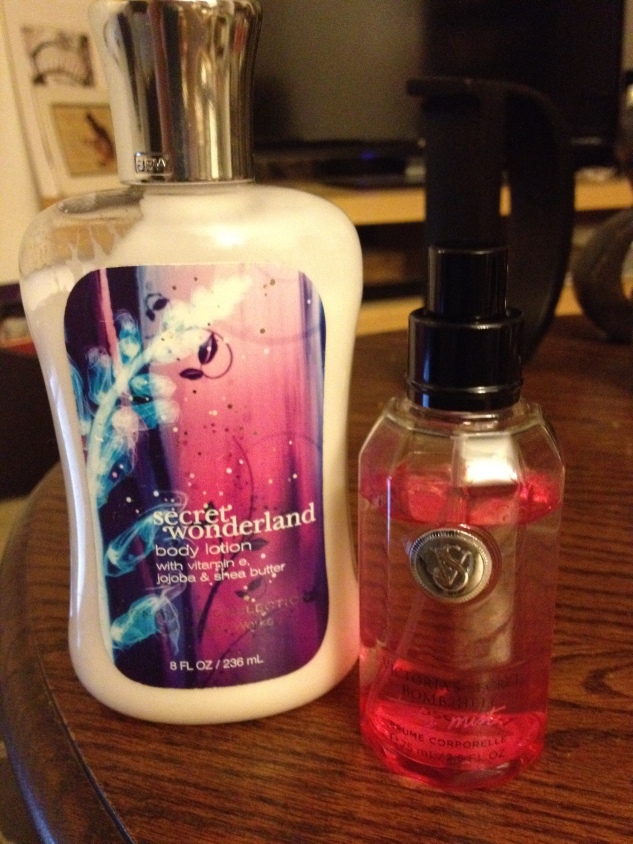 And here, we find the fragrances I carry with me when I’m teaching at high schools. Victoria’s Secret Bombshell keeps me feeling like a sophisticated woman in an arena so devastatingly dominated by Justin Bieber Someday, and Bath and Body Works’ Secret Wonderland so I can fit in with the sixteen-year-olds just a little bit (and it makes me think of Christmas!).

And so, that wraps up the current smelling sauces I’m drenching myself in these days. I should warn you though … I don’t do well with those that wear the same fragrance as myself (which, unfortunately, could eliminate perhaps five of your options at a time). Scent is one of the heaviest identifying factors that I associate with a person, and having anyone else smell like me is a huge pet-peeve of mine. I have a friend who wore Thierry Mugler’s Angel for years, and I refuse to wear it despite the fact that I could funnel that stuff straight down into my nostrils (because it smells that good). Why? Because that’s her scent. I want you to like how I smell, but I don’t want you to buy it. And sure, I may have used five scents within the past year, but, well, that’s just too bad for you. You can’t smell like me. My dad bought my mom my same fragrance one year for Christmas because he’d liked it so much on me. Just … no.

2 thoughts on “I smell so good all the time. And no, I’m not wearing ‘Justin Bieber’s Girlfriend’.”