I am not particularly talented when it comes to intricate hairstyles.  Trust me.  I can’t French braid (yet), and I’ve found that it’s more difficult for me to manipulate others’ hair into something pretty as opposed to my own.  I don’t know, I’m just more comfortable with my hair’s own texture, weight, and versatility.  But I know I need to get over that.

What helps me improve, however, are well-written how-to articles that provide steps and visuals for tackling difficult hairstyles.  I’ve mentioned such articles before, and I’ve been keeping one from the September 2012 issue of InStyle that I’ve just now put to use.  It took a little patience to work out, but I think I actually managed some success! 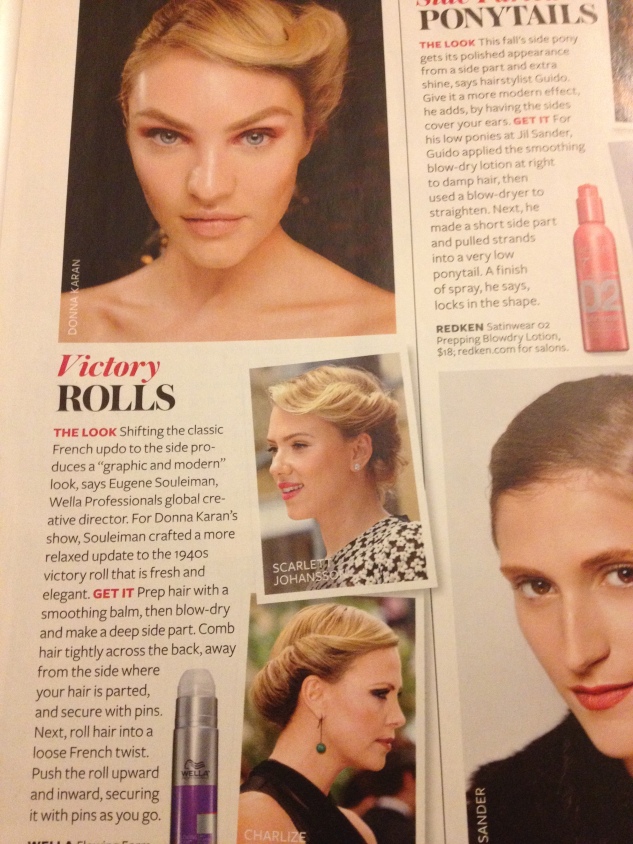 These here are what we call “liberty rolls”.  In American history, we saw them popularized during the 1940s as “victory rolls” on women during World War II, and they’ve continued to evoke old-fashioned flair ever since.  I actually believe they may have had even earlier roots as a hairstyle worn by fighting proletariat women during the French Revolution, but I can’t find enough scholarly research to back up my hunch.  But I like that they’re a little medieval, a little punk rock, a little French proletariat, a little Andrews Sisters … a little everything in history.  And as as girl who loves her some history from almost any time and place on this Earth, I’m totally down.

I’m not lying, this style looked intimidating.  What made this tutorial difficult is the fact that you weren’t given a picture of what it could look like from the back, so I kind of had to just make that up on my own (and I forgot to take a picture of the back when I finished … sorry!).  The article also suggests blowing out your hair and then immediately going into styling it, but I always feel that such styles form much easier on second day hair so I’d suggest waiting to try this the day after you wash. 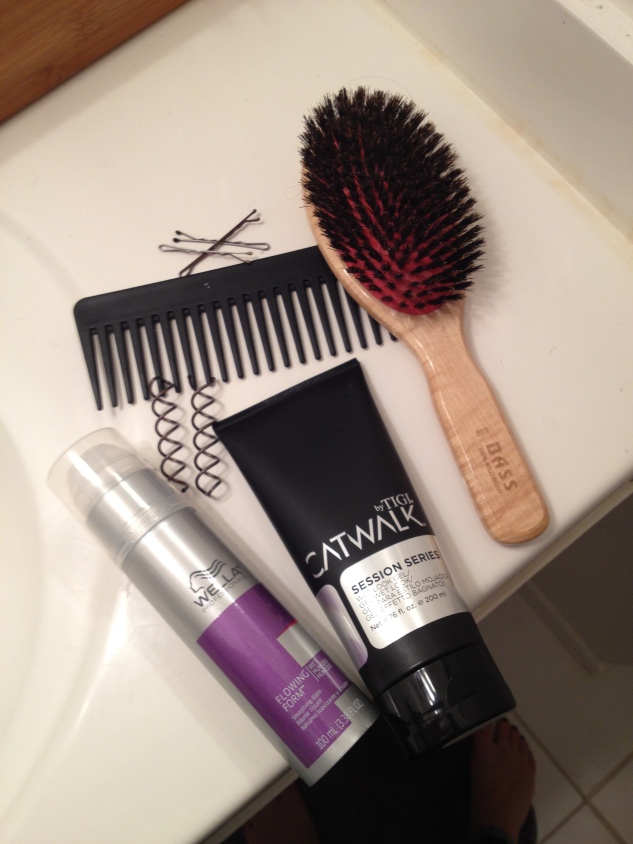 I used the Wella Flowing Form Smoothing Balm that they suggested, and it works well at giving the hair flexibility with frizz control.  Pretty good stuff too at thirteen bucks!  I coaxed my hair into a deep side part and brushed the hair tightly away from the side I parted on.  I then combed on some Wet Look Gel from the TIGI Catwalk Session Series line to give the combed-over side a sleek look (and to secure it in place).  I pinned all the hair on that side back, just to temporarily keep it out of the way.  For the rest of (and the majority of) the hair, I then began just kind of twisting it upward into a roll.  Starting at the front of my head, I twisted back, back, and back.  There was little method to my madness; I kind of just kept twisting and coaxing until it looked something like the pictures.  I’d occasionally stick a bobby pin into the roll to secure it in place against my scalp.  Once I’d rolled all the way to the back, I had to decide what to do to finish it all off.  That’s where I used the Goody Spin Pins.  I just kind of joined the two sides of hair together in the back, twisted them into a small knot, and “spin pinned” them in place to create a neat little low-set bun.  A couple extra pins to nail down strays, top with some hairspray, and I’m satisfied. 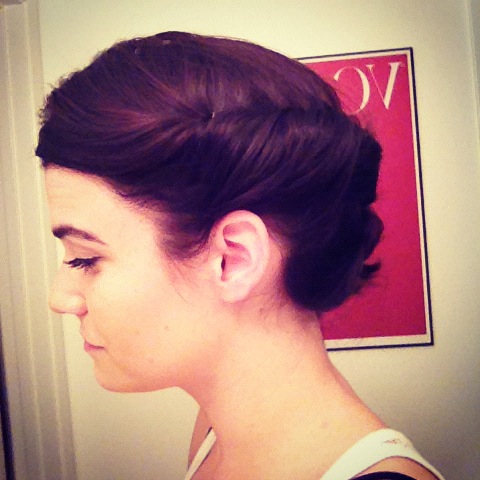 It’s not as exaggerated as I’d like it to be (like in the Donna Karan picture in the article), but I liked it!  And what an accomplishment for me!  It felt really chic with my new, darker hair color, too.  I like that as elegant and old-fashioned as it looks, it still has this edge to it that feel sassy.  It won’t exactly be my go-to for fast styles (I’d say it took fifteen minutes), but I love that it’s an option I can handle by myself now.  Give it a whirl and let me know how it goes!  xo, MR

3 thoughts on “Give me liberty or give me … a liberty roll!”