If I can say one thing, just ONE THING, about the Emmys this year, it’s this: 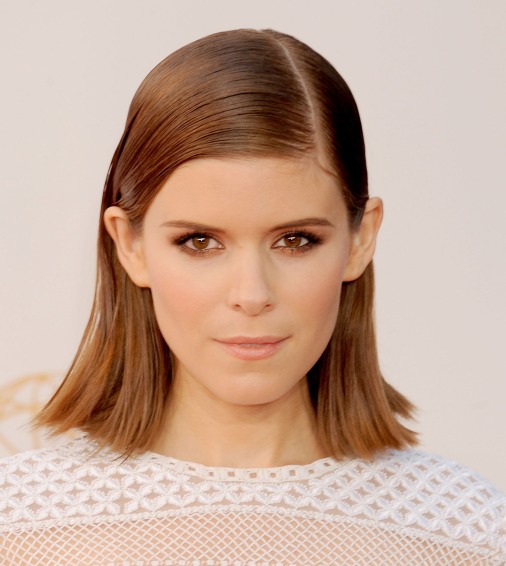 I’ve been so ridiculously busy and preoccupied lately that I’ve barely been able to lift an eyelid even for Fashion Month (seriously, I haven’t watched the Prada OR Jil Sander show yet and Milan Fashion Week is OVER … if you know me, you know that’s unheard of), but something like that seen above will always demand a moment of my attention.  Kate Mara had her hair styled for this year’s Emmy Awards in a way that I’ve been obsessed with for about a half-year or so.  I’ve tried it myself a couple times, and it works best with hair that has not been freshly washed, but perhaps blown out straight a couple days ago and now has accumulated some natural oils at the scalp.  Add some gel that imparts shine, tuck behind the ears, and BOOM.  HIGH FASHUNZ!  Now, you can’t exactly flip your hair all over the place Herbal Essences-style, but if you just buckle down with it and go with the vibe, it’s great.  I’m always so in love with Kate Mara’s hair color, too.  I don’t really know what color it is, to be honest.  It’s not quite red, but I wouldn’t exactly call her a brunette.  Auburn?  Autumnal?  One should be so lucky to have their hair color named “autumnal”.

And now that I’ve mentioned a thing or two about big sister, I’m going to take a moment to drool over little sister, too.

For a good year or so, I was really, really unconvinced by Rooney’s whole aesthetic.  I haven’t seen Girl with the Dragon Tattoo, and I don’t really ever plan to, but I think I just couldn’t buy Rooney’s look because it seemed so heavily influenced by the film.  I would see how Rooney used to look and dress prior to Tattoo, and I couldn’t help but feel like she simply wanted to remain in character beyond the camera (though perhaps in a toned-down, more glamorous way).  The vampy lips and dark brows, the pale skin and stark expressions, and the raven-hued hair always styled with a sleek edge- is this really Rooney that we’re seeing, or are these just remnants of Lisbeth Salander?

And then I got to thinking, how often am I inspired by a character, whether it’s in a movie, a book, or a magazine (because let’s face it- we really can only understand celebrities as characters and not true people, unless we are to know them personally) when it comes to my own hair or makeup?  How often do I draw upon the look of another for my own, whether by adaptation or straight-up replication (because we’ve all copied that outfit we saw on Pinterest down to the very nail color she was wearing)?  How often have I studied what they did for their makeup, only to tweak it and adjust it until it suited my preferences, but still started with what someone else did first nonetheless?  How often have I actually had someone else in mind when deciding what eyeshadow to put on my own eyes?

I sometimes feel we obsess over the idea of “being ourselves”, and I’m not always certain that we really know  how to do this or what it even means.  My own tastes in beauty and fashion are a collective puzzle, made whole by the tastes and preferences and creations of thousands of others.  I mean, that’s what inspiration boards are, right?  You take the ideas and looks that others love and put them all together to determine what it is that you love.  It takes the manner of thousands to develop the manner of one.  My point is, I think I’ve made peace with the possibility that Rooney Mara’s current personal tastes in beauty may have indeed been heavily influenced by her film character.  She may totally be channeling a glammed-up Lisbeth Salander with that matte skin and eerie shade of plum, but so long as it looks awesome and she’s down with it, who cares if it wasn’t Rooney’s completely original idea?  And so lately I’ve felt free to fall head over heels for Rooney’s entire moda.  I love it!  I wish I could pull it off every day!  But for now, I’ll save it for an October Friday night or two.  Or three or four.  xo, MR