Alright, kids.  It’s that time!  I think the first thing I should note is that there were so many people missing tonight!  No Lupita Nyong’O, no Jennifer Lopez, no Emma Stone, no Gwyneth Paltrow, no Halle Berry, no Jennifer Aniston, no Amy Adams, no Viola Davis, no Angelina Jolie, no Kate Hudson, no Beyoncé, no Nicole Kidman – and those are just the regulars that I feel we see on most every Oscars red carpet.  So, that kind of bummed me out as I always look forward to seeing what I would classify as the heavy-hitters.  However, there are always the after parties so we’ll see what those bring.

Bear in mind that I take into consideration the entire look when determining my favorites.  This means I like the hair, the jewelry, the makeup, everything (and not just the dress).  So, here are the four from tonight’s Oscars red carpet that I absolutely adored! 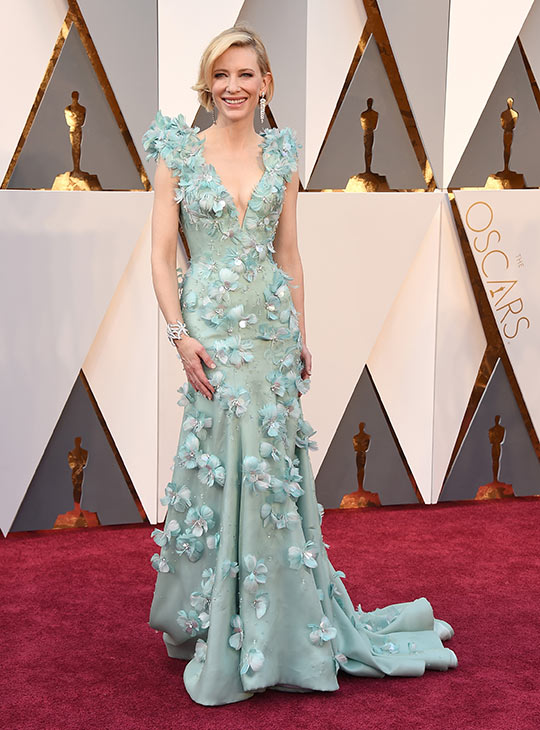 So, I’ve seen stuff on the internet about this dress saying things like, “Step away from the glue gun, Cate”, and that it looks too crafty.  Um, I’m sorry, but have you ever made a craft that looks as good as this dress?!  I mean, COME ON.  Cate looks like the epitome of a fairy princess in the best possible way wearing this gorgeous Armani Privé gown.  With her dainty, elven face, gowns like this are a perfect match for her.  Feminine, flowery, and in a shade that I’d describe as robin’s-egg-blue (with crystal details and what looks like little purply bits found in the flower appliqués), this was the first look I saw tonight that made me squeal.  It’s that every-little-girl’s-fantasy kind of dress.  The silhouette is incredibly flattering, too, with the exaggerated shoulders and deep v-neck.  Simple beautiful.

Best Moment of SHUT THE FRONT DOOR YOU IS LOOKIN’ HOT!

Yeah, Kate Winslet is aging backwards.  I mean, the woman just doesn’t age (though a contract with Lancome does help- Genifique, anyone?).  Her face has evolved into one that evokes Old Hollywood glamour and sophistication, and her red carpet styling always lends itself quite well to that aesthetic.  This particular look, however, took a bit of a sidestep away from the stately sophistication and veered more into HOT MAMA territory.  I mean, wow.  The loose waves coupled with the shiny texture of this Ralph Lauren gown amounts to a look that is at once futuristic/edgy and timeless/simple.  I am crazy about the liquid feel of this silk lame.  And her standing next to Leo?  Twitter just about lost its mind.

Confession- I have felt for a long, long time that the partnership between Jennifer Lawrence and Dior has been a huge mistake.  I just don’t really find that Dior suits Jennifer.  She’s a young, cool girl with an edge of crass to her, and Dior is the pinnacle of ladylike sophistication seen on the likes of statuesque, elegant actresses such as Marion Cotillard and Charlize Theron.  It just doesn’t jive for me, and the gowns and clothes that Dior has had Jennifer wear always seem to end up wearing her instead.

However, tonight was a welcomed exception.  This dress felt cool.  This dress felt edgy.  This dress felt young.  And the overall styling was fantastic.  I love that Jennifer’s been going more platinum with her hair these days.  That icy white platinum look?  Ooh, I love it.  I’d do it myself if I knew my hair wouldn’t literally snap off in heaps after three weeks.  I’d need a bucket of Olaplex to survive.  But anyhow, hats off to the JLaw team tonight.  She looked stunning, and I’m thinking she and Dior may have turned a new corner in their relationship.

A silhouette like this typically isn’t my favorite because we’ve seen it so much, but for some reason, this outstanding shade of vermillion makes it all okay.  I think it also may be the fact that we never see Charlize in this color.  We’ve seen her look stunning in gold, white, black, and baby pink, but I don’t think we’ve seen her choose serious color for the Academy Awards since 2010 when she wore her lilac bustier gown (which everyone hated but me).

My most favorite look of Charlize’s is actually the forest green Dior gown she wore to the 2006 Oscars, back when John Galliano was still at the helm.  It was so dramatic with that giant bow, and the color was so unexpected.  I guess that’s what I love Charlize for- she can wear absolutely anything, so unusual silhouettes and bright colors are always a delight on her.  And I have to say, if Imperator Furiosa had to walk a red carpet and couldn’t choose to wear black, it may as well be this uncompromising shade of red.  My mom loved it, too!

Other honorable mentions include Naomi Watts’ gown that reminded of the Rainbow Fish, Margot Robbie’s I-am-literally-a-golden-Oscar-statue moment, and Saoirse Ronan’s gorgeous shade of green that made me think of a mermaid.  I also liked the architecture of Olivia Munn’s gown.  Alicia Vikander’s dress was beautiful too, but the whole look was definitely a bit too inspired by Belle, all the way down to the half-bun.  Daisy Ridley’s was pretty but I would’ve preferred a full-length gown, and Julianne’s was nothing special to me.

Rachel McAdams’ was a bit of a yawn for me too, and while Brie Larson’s gown was really pretty her hair styling sort of ruined the look for me.  I’m not much for pulling back hair that way with a flowy gown that has lots of movement.  I would’ve loved to see some loose waves, or contrast the gown with a sleek chignon.  And Rooney Mara has become as predictable as ever!  I don’t expect to ever see her in bright pink or anything like that, but there’s got to be some way of changing things up while sticking to her general elegant-goth aesthetic.

Well that just about wraps it up for me, and now its time to dig for some extra details on the makeup- my very favorite part!  Give me your thoughts and let me know what you think.  And now, it’s time to start the countdown to the Met Ball!  xo, MR

If I can say one thing, just ONE THING, about the Emmys this year, it’s this:

I’ve been so ridiculously busy and preoccupied lately that I’ve barely been able to lift an eyelid even for Fashion Month (seriously, I haven’t watched the Prada OR Jil Sander show yet and Milan Fashion Week is OVER … if you know me, you know that’s unheard of), but something like that seen above will always demand a moment of my attention.  Kate Mara had her hair styled for this year’s Emmy Awards in a way that I’ve been obsessed with for about a half-year or so.  I’ve tried it myself a couple times, and it works best with hair that has not been freshly washed, but perhaps blown out straight a couple days ago and now has accumulated some natural oils at the scalp.  Add some gel that imparts shine, tuck behind the ears, and BOOM.  HIGH FASHUNZ!  Now, you can’t exactly flip your hair all over the place Herbal Essences-style, but if you just buckle down with it and go with the vibe, it’s great.  I’m always so in love with Kate Mara’s hair color, too.  I don’t really know what color it is, to be honest.  It’s not quite red, but I wouldn’t exactly call her a brunette.  Auburn?  Autumnal?  One should be so lucky to have their hair color named “autumnal”.

And now that I’ve mentioned a thing or two about big sister, I’m going to take a moment to drool over little sister, too.

For a good year or so, I was really, really unconvinced by Rooney’s whole aesthetic.  I haven’t seen Girl with the Dragon Tattoo, and I don’t really ever plan to, but I think I just couldn’t buy Rooney’s look because it seemed so heavily influenced by the film.  I would see how Rooney used to look and dress prior to Tattoo, and I couldn’t help but feel like she simply wanted to remain in character beyond the camera (though perhaps in a toned-down, more glamorous way).  The vampy lips and dark brows, the pale skin and stark expressions, and the raven-hued hair always styled with a sleek edge- is this really Rooney that we’re seeing, or are these just remnants of Lisbeth Salander?

And then I got to thinking, how often am I inspired by a character, whether it’s in a movie, a book, or a magazine (because let’s face it- we really can only understand celebrities as characters and not true people, unless we are to know them personally) when it comes to my own hair or makeup?  How often do I draw upon the look of another for my own, whether by adaptation or straight-up replication (because we’ve all copied that outfit we saw on Pinterest down to the very nail color she was wearing)?  How often have I studied what they did for their makeup, only to tweak it and adjust it until it suited my preferences, but still started with what someone else did first nonetheless?  How often have I actually had someone else in mind when deciding what eyeshadow to put on my own eyes?

I sometimes feel we obsess over the idea of “being ourselves”, and I’m not always certain that we really know  how to do this or what it even means.  My own tastes in beauty and fashion are a collective puzzle, made whole by the tastes and preferences and creations of thousands of others.  I mean, that’s what inspiration boards are, right?  You take the ideas and looks that others love and put them all together to determine what it is that you love.  It takes the manner of thousands to develop the manner of one.  My point is, I think I’ve made peace with the possibility that Rooney Mara’s current personal tastes in beauty may have indeed been heavily influenced by her film character.  She may totally be channeling a glammed-up Lisbeth Salander with that matte skin and eerie shade of plum, but so long as it looks awesome and she’s down with it, who cares if it wasn’t Rooney’s completely original idea?  And so lately I’ve felt free to fall head over heels for Rooney’s entire moda.  I love it!  I wish I could pull it off every day!  But for now, I’ll save it for an October Friday night or two.  Or three or four.  xo, MR