Any day now, I’ll be receiving four giant September issues in my tiny little mailbox.  Well, a couple of them will be much larger than the others (because Lucky is still working its way back up the ladder, after all), but you all know how I feel about September.  It’s the biggest month of the year for fashion, and if you’re doing things right as a fashion publication, your September issue each new year is your biggest issue ever with all kinds of designers and other folks in the industry paying to have their advertisements in your magazine.

However, I have to admit that when I finally open my mailbox and see that behemoth set of pages clogging up space and squashing the rest of my mail, with my eyes practically dilating and the small rush of excitement flowing through my nerves, I get a bit anxious.  There’s just so much to look at, so much to take in, and knowing how I am, I tend to fall prey to whatever trends the editors dictate.  Sometimes I take on a trend just for fun, sometimes I do it because I really, genuinely like the look of it, and other times I do them, well, because I’ve been told I should.  Lame.

When it comes to beauty though, I’ve tried everything at this point.  I’ve done the bright eyeliners for spring, the sleek middle parts, the burgundy lips for fall, the rumpled texture, the metallic eyeshadow, the “natural” look, everything.  Well, everything but braids really, because I still can’t braid.

So I’m making it easy on myself this next season.  I’m trying one beauty trend from the Fall 2014 runways.  And it literally costs nothing, and takes no effort. 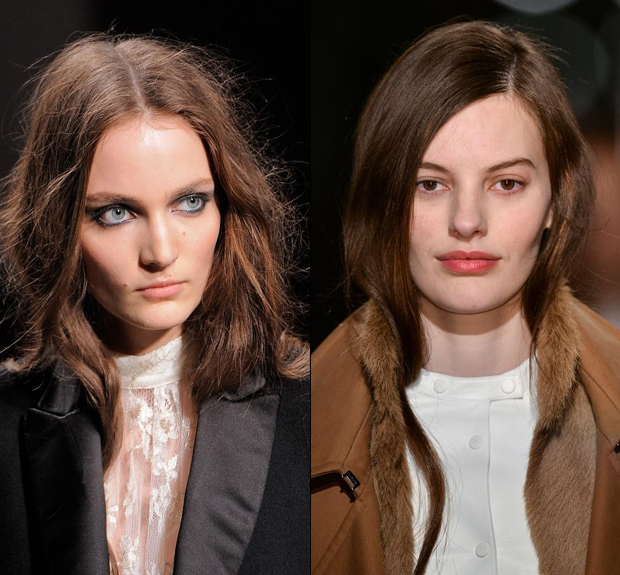 Now I don’t know about you, but I can’t even say that this is a trend I’m going to try because this is something that I’ve actually been doing for years.  I love leaving my hair tucked in!  Leave it in leather jackets, turtlenecks, trench coats, anything.  There’s something so chic and, I don’t know, Scandinavian about tucking in your hair.  It feel mysterious and luxurious, haphazard and I-have-so-many-places-to-go-but-I-have-an-amazing-coat-and-sense-of-fashion-and-I-can’t-compromise-either kind of feel.  It sort of makes you want to ride a horse and race off to a castle and yet have a cup of coffee in a small, trendy cafe at the same time.

I don’t know why tucking in my hair makes me feel so many things, but I haven’t been this excited for a beauty trend since red lips made an official comeback in 2006 (and they really haven’t left ever since).  And like I said before, it costs nothing and takes zero effort.  Boom.