I remember when it was a mortal sin to have your roots showing.  It meant you were sloppy, didn’t know that white wine goes with fish, and couldn’t pay your bills.  I remember thinking that I would never be able to have highlights because the obsessive upkeep was daunting.

And then around 2008 I saw a picture of Drew Barrymore and Sarah Jessica Parker, each with maybe a half-inch of roots showing through their then-blonde hair.  Huh.  I liked it; I liked the ease and style of it.  I hadn’t realized that a certain model named Gisele, with hair that was highlighted in strategic places not reaching above her chin, had unknowingly kicked off what would probably the biggest hair trend of 2010s and I was just seeing the tip of the iceberg with Drew and SJP.

It’s funny how some hair trends can be so surprising.  I used to think I’d never have highlights because I didn’t like the perfect, stripe-ish quality they had, and I didn’t want to be back in the chair every few weeks.  A few years ago I never thought I’d see anything like ombre.  Now there are varieties of it that I don’t think we will ever not see.  Some hairstyles are odd in that they make their way back around again in a cutting-edge sort of way, even if we thought we’d never see them again (like the painfully dated bowl cut we’ve seen on Zendaya, who somehow makes it look good).  And some hair styles are just timeless and always lovely to behold.

So what’s trending in hair that I like right now?  One concerns color, one concerns texture, and another concerns cut. 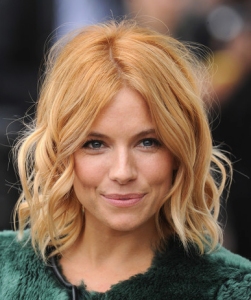 When I cut my hair short I hadn’t realized that Sienna Miller had cut her just a month or so before me.  We have been relative haircut twins for this past year, but what I actually love about her current hair is the color.  This isn’t quite red enough to be strawberry blonde; it’s more of a rose gold.  It’s playful but not veering into pastel territory.  It’s unexpected.  I would love to try this myself but I’m worried the maintenance would be unbearable and I’m not sure how well it would work with me skin.  We’ll see though. 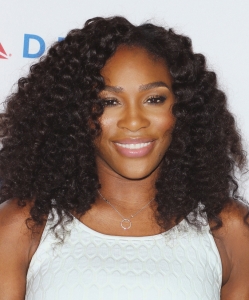 Serena Williams was having a pretty great 2015 until this past month when she was defeated in the U.S. Open.  Her playing season for the year appears to be finished, but hey- she championed the Australian Open, Wimbledon, the French Open, scored a Vogue cover, and she’s had awesome hair doing it.  Serena’s natural curls are so pretty.  I love her texture and how voluminous her hair is with a side part.  Serena’s hair is bigger than life and has matched her bold determination and personality this year.  Alas, I will probably never have hair like this, so all I can do is swoon from afar. 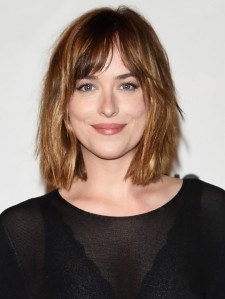 I know, I know.  Dakota Johnson sort of irritates me on principle, just because she did Fifty Shades.  Yes, sorry, just because of that.  But that is no reflection on how fantastic her hair has looked these past couple months.  During her press tours and appearances earlier this year surrounding Fifty, I actually didn’t care for her hair that much because it seemed like she was going for a Charlotte Gainsbourg look but was somehow missing the mark.  A few months later though, and a mid-length cut with longer, thicker bangs frequently parted in the middle has me considering bangs for myself.

Ugh- I never, ever thought I would consider bangs again, for as long as I lived.  It isn’t so much the upkeep as it is getting them to look just the way I want, everyday.  And if they look wonky, I can’t through it all up in a ponytail and pretend they’re gone; I have to pin them back, which defeats the purpose of having them in the first place.  But this “modern shag” at least looks amazing on Dakota.  I’ll just live vicariously through her hair for the moment.

I’m not certain what will be happening to my own hair in the next couple months because of my spending restriction plan, so for now, I may just keep what I have and save the changes for later.  Anything different you’re thinking of doing these days?  Maybe I can live vicariously through you, too.  xo, MR