And if you don’t get the Tolkien reference in the title, I can’t help you with life.

If you have known me personally, you have known that I have been on nothing short of a hair quest, a hair saga, a hair journey to the Misty Mountains and back again, since about 2010.  It has been bizarre, to say the least.  I have reached the heights of beach waved, ombre’d glory, only to somehow look in the mirror on some depressed afternoon a month later and not like what I see.  For no good reason.

That’s what’s been bizarre about it.  I’ve been chasing down something with my hair for years, and yet when I look back at pictures from just two months prior I think Good God, Lemon!  Why did you ever complain?!  And yet, there’s still that hair moment that I haven’t landed on.  And it’s strange because I truly feel that I’ve had so many great hair moments!  I don’t know what I’m waiting for.  Maybe the cause is ungratefulness.  Maybe it’s comparison.  Maybe the dissatisfaction comes from an itch for change that doesn’t actually need to be scratched.  I think if I could sum up my hair chronicles in a song it would probably be U2’s I Still Haven’t Found What I’m Looking For.  It’s been DRAMA, guys.  I have run, I have crawled, I have scaled these city walls …

But anyhow, Bono and I digress.

So let me just recount my hair journey from the past six months.  That’s it.  And that’s probably all you can handle; you would hate me otherwise.  I can go on and on about my own hair chronicles.  Trust me- my friends know it.  It’s one of my more narcissistic habits that I’m ashamed of until I get started (and then I can’t stop).  But then again, I could go on and on about your hair too, probably.  Man, I reeeeally wanna braid someone’s hair right now.

In January of 2015, I had long, brown hair.  I would put it in ponytails.  I would curl it.  I would put it up in topknots.  I will never again complain about long hair simply for the fact that you can do so much with it.  I miss sleek, long ponytails that feel very fashion forward.  I miss pretending to be a Victoria’s Secret model (a nice little game to play with yourself).  But as is common, I had an itch for change.  Pinterest, friends’ haircuts, and trends will do that to you.  And sure enough, in either late January, Justin Kamm cut my hair into a lob and lightened it up as well.  I keep trying to make a permanent mental note that I ultimately don’t feel like myself with completely dark hair, but about every 16 months or so, I forget and then return to my senses a few months later.  It’s not that I hate it or think it’s a bad look; I just think the lighter bits are more flattering. 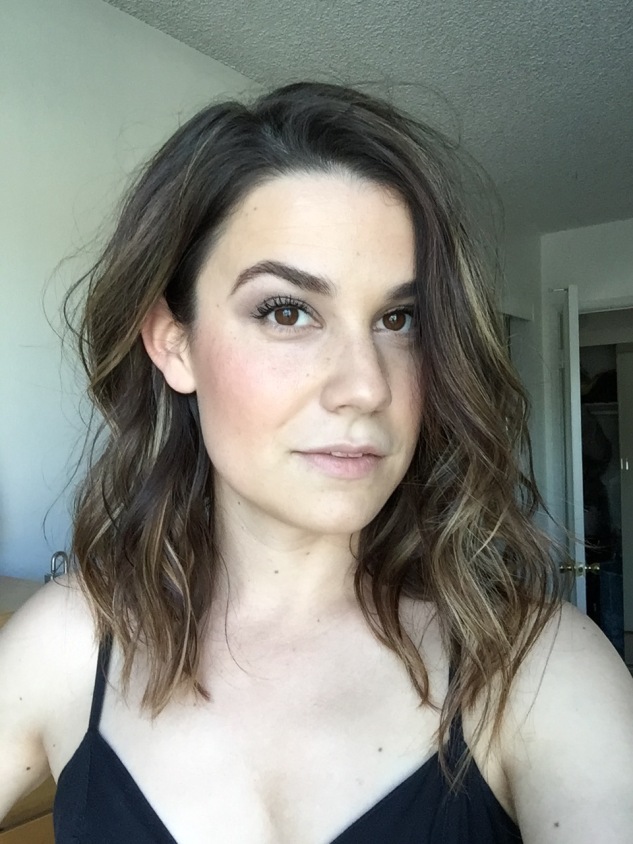 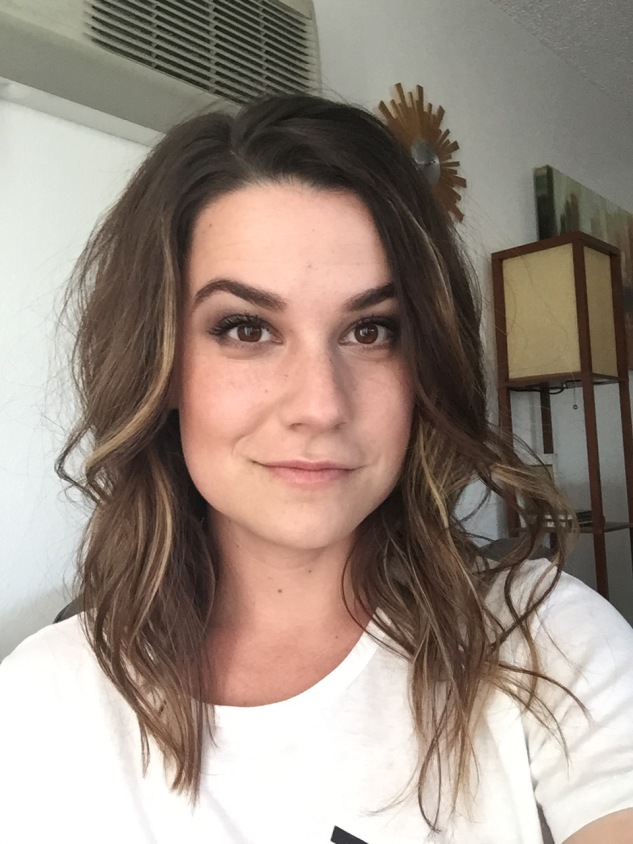 But then, on Friday, April 3rd, I decided to go for the most drastic haircut I’ve ever had.  By that point I’d known for about one month that we would be moving to Chicagoland, and something in me just needed to go for it.  I had always wished that I could see what my hair would look like short, but fear always kept me from making the chop.  I’d been comfortable and at ease with my long-ish hair that I’d had all my life, but I sort of came to the realization that it’s just hair (and not my identity), and it can grow back.  Moreover, I felt that if I can make the push out to the Midwest, I can also make the push to cut my hair.  It was time to face the unknown.

And so, once again, Justin worked his magic. 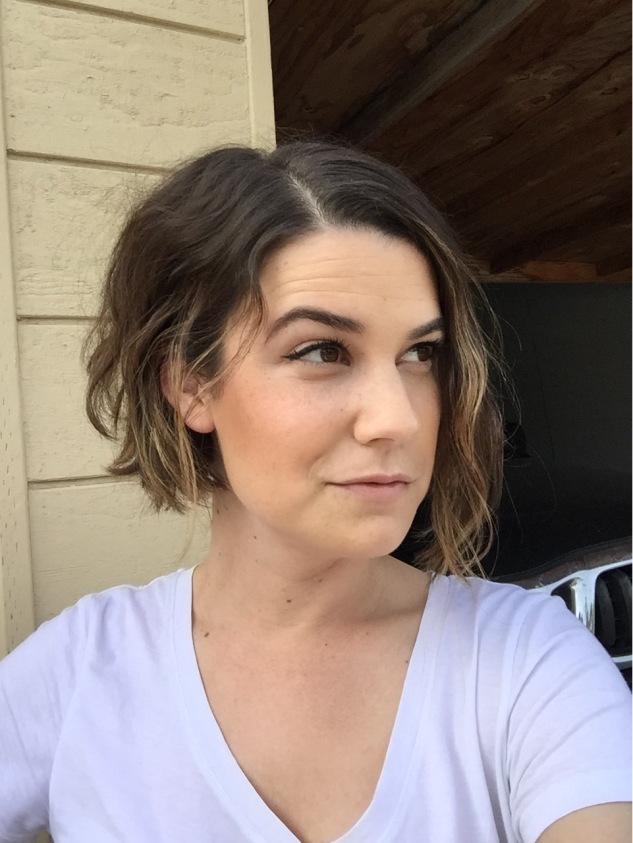 The cut was a bit of a shock for me.  I was in foreign territory.  I know it’s not the shortest cut you’ve ever seen (obvi), but it’s a funny thing when you suddenly become conscious of just how much you’ve been hiding behind your hair your whole life.  When you feel that breeze on your bare neck and reach back only to find nothing to sweep over your shoulder, you feel vulnerable and exposed.  It’s just your face sticking out there!  No long princess curls or beachy waves to toss around and taut as your pride and joy; no feeling of safety that Oh, I don’t feel confident about my face today, but at least I’ve got my long hair.  Nope.  And even while the cut may be a lovely expression in itself, when people look at you, they’re really not seeing all your hair like before (or at least that’s how we tend to perceive these things on ourselves).  There’s some hair, but what the eye now sees from the clavicle and up is pretty much just your face.

And with that, I found that when you cut your hair short, you really have to own it.  Like, you have to own the crap out of short hair.  You have to own it like it’s your job and like it’s the best haircut people have ever seen, even on days when you’re feeling unsure and you actually have no idea what other people are thinking.  You have to be intentional about it and go with it when it’s messy and when it’s styled.  In the weeks following the cut, there were moments when I felt so cool and so French in a way I’d never felt with long hair.  And then there were days when I sensed people were trying to backhandedly tell me that my hair was the most unprofessional, unkempt mess they’d ever seen.  And you know what happens when you own it both days, either way?  You love it.  You really, really love it. 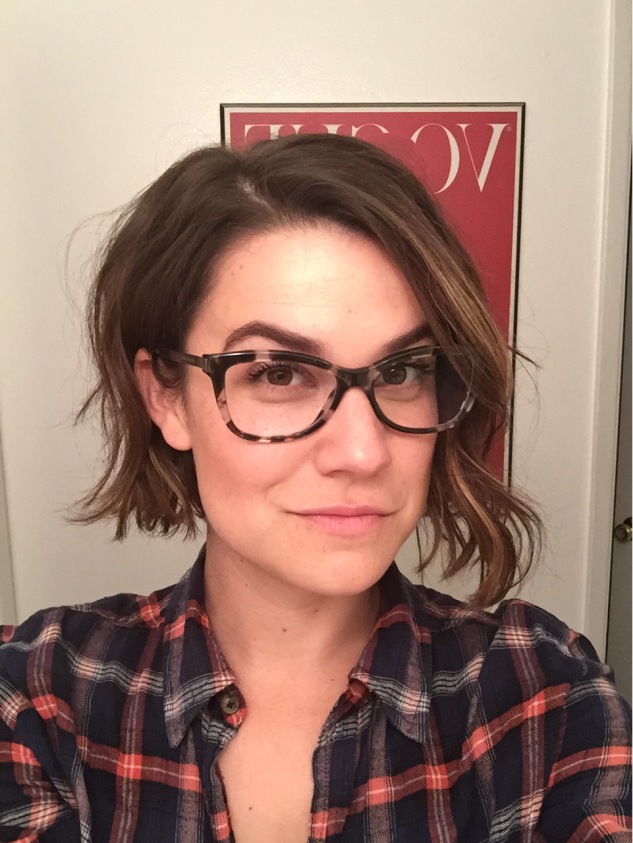 Once the cut started growing out a bit, it really hit the sweet spot. It gained a little more bounce and I started finding my own way around it.  With short hair you discover that just the smallest changes make a big impact- tucking it behind the ear on one side, a change in part, flipping it all the way over the opposite side a’ la Riawna Capri and all the bajillions of LA-based platinum blonde mid-lengthers that she inspired with Julianne Hough (and yes, if you’re from LA and you’ve gone white-platinum mid-length and flipped your hair to one side, you can thank Riawna Capri for that – not kidding).

But sure as the sun rises, I came to find that the longer my hair grew, the more excited I would get about styling it.  I think I just love the process of growing it out and playing with it.  Even in writing this, I’m coming to find that when it comes to hair I sort of live for the journey.  In most things, I actually do try to live for the destination as I believe that a journey doesn’t amount to much without a meaningful endpoint, but with hair, I’m different.  With hair, it’s all about the cliiiiiiiiiiiiiiiiiiiiiiiiiiiiiiimb. 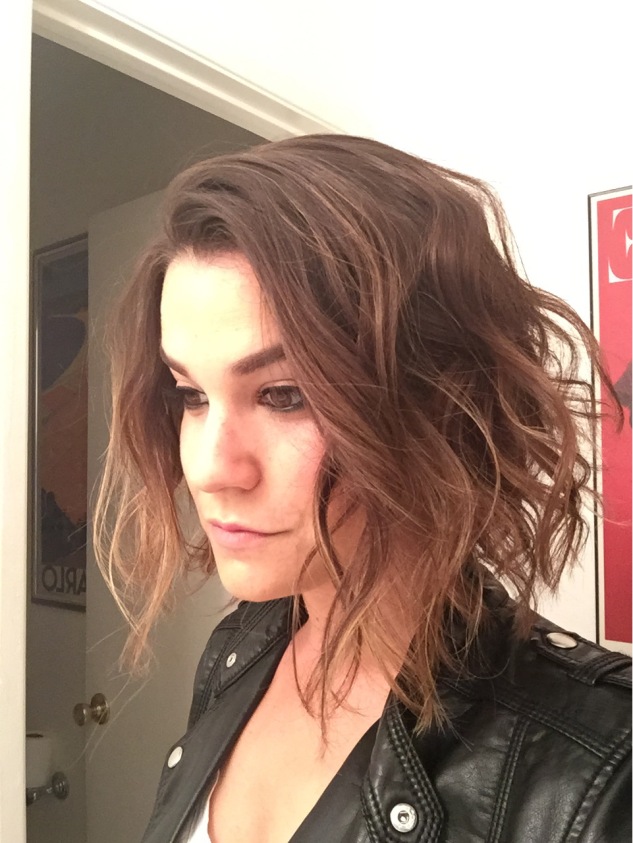 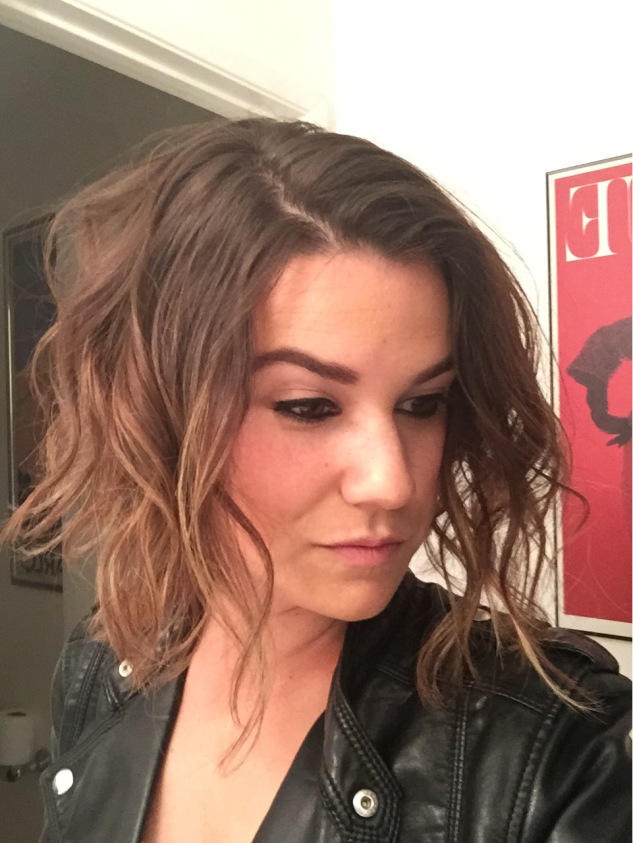 However, with the impending move, I knew that I’d need to stop by Salon 9 one final time for updated color.  I wanted to add more blonde, and in preparation for growing it out long I also wanted to even out the a-line so the back wasn’t too much shorter than the front.  And with that … 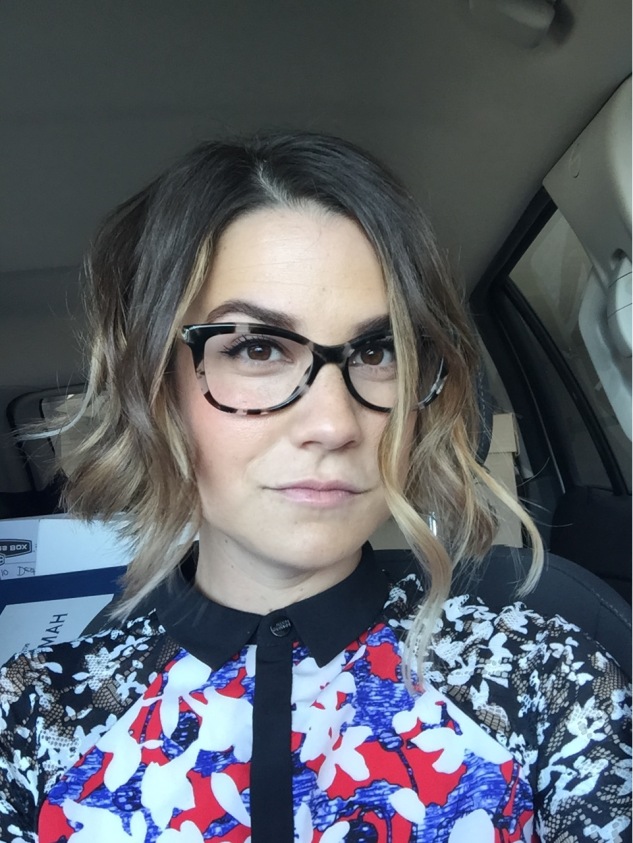 Blonder, a little more even, and ready to grow through autumn.  I loved the texture of this cut and I can only hope that it isn’t lost in the growth or by some poor hair stylist who gives me a trim out here and hacks it into oblivion.  That being said, I do have a couple helpers that have been upping my texture and styling game lately. 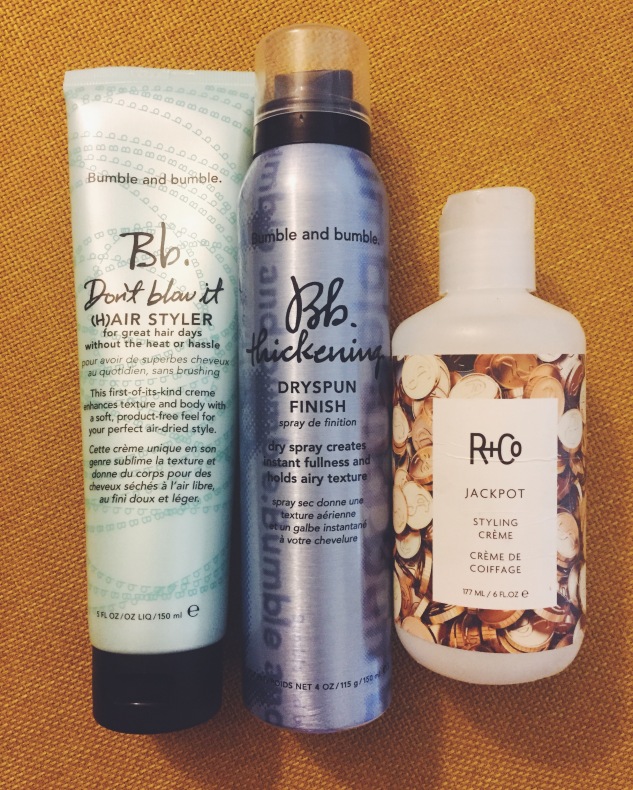 I’ve been using Bumble and bumble’s Thickening DrySpun Finish for a long time now.  It does basically the same thing as Oribe’s Dry Texture but costs half the price.  The scent is amazing (and I know, Oribe’s is amazing too) and it works as a hybrid of dry shampoo, hair spray, and volumizer.  I love it.  Their Don’t Blow It creme is pretty good for me these days, too.  It apparently doesn’t work well on hair that’s already curly or frizzy, but it’s pretty good for my natural texture.  A little scrunching helps, and my natural wave is enhanced without the frizz (or ANY effort).  And the R&Co Jackpot styling creme is what I use for smooth looks right now.  I bought this half-used bottle from a hairstylist at Salon 9 for five bucks.  I use it on blowouts or when I’m sleeking back my hair, but it’s also good for men’s styles.  Just be careful- the scent is nice but powerful, and too much can be a bit overwhelming.  I also continue to use Living Proof’s Instant Texture Mist, but you’ve heard me blab about that on here before.

I’m excited to continue my growth process and see where the road leads me, but for now, I’m trying to enjoy my just-above-shoulder length.  Cheers to enjoying what you have!  xo, MR