January is a funny month.  The huge climax of the holiday season has worn off, it’s consistently cold out, and things go back into their typically mundane routines.  You’ve got all your new gifts (and might be over them already), have probably returned from your vacations, and are perhaps well on your way to keeping any resolutions you’ve made for the new year.  You work out, you go the movies, you shop around for yourself … nothing particularly special.  Nothing particularly new.

What I love about the fashion and beauty spheres, however, is that everything is always new.  Everything is always forward.  You are more than welcome to enjoy the present moment with all its current trends and styles and happenings, but you also have every right to anticipate the coming season with all the excitement and future-minded thinking in your being.  In fact, it’s the only way to operate in such a world.  In fashion and beauty, it’s never too early.  The magazine issues you are seeing on stands today are the January issues (and they’ve been there for at least a week now), and they will all have some kind of spring preview in them.  The spring previews will only continue to grow bigger in the February issues, until the March issue comes out and there you’ve got the second biggest month for fashion and beauty publications of the year next to September.  And I love that things work this way.  There’s always something to look forward to.  In fashion and beauty, today is pretty much yesterday, and tomorrow can be seen everywhere today, and yesterday will probably serve as the inspiration for tomorrow so be sure to hold on to yesterday’s stuff today just in case for tomorrow.  Yes, fashion just got meta, Looper style.

So, where in the beauty world can we see tomorrow, today?  Well, if you keep up with any beauty blogs or magazines, you may have noticed articles or features over the past month beginning to drop the names of products that you’ve never heard of.  Like, you’ll see a feature on some makeup guru’s “must-haves” and they’ll mention some kind of lipstick or  whatever that you’ve never found in a drugstore.  For all you know, it doesn’t even exist.  That’s because us low-life plebeians can’t get our hands on such things yet because the product hasn’t been launched to retailers, but January is usually the time that you’ll see them making their first appearances!  Now, the new products have all been sent in advance to important folks in the beauty world (celebrity makeup artists, etc.) to get the word out early, and of course, part of getting the word out is mentioning them in magazines and interviews to ramp up public anticipation.  January is also a common time to release advertising campaigns featuring a new spokesmodel.  My best example I can think of for this year would be Lea Michele for L’Oreal Paris.  Next time you see Lea in a magazine, you can bet your butt that she’ll be either in a L’Oreal ad, pictured alongside some kind of L’Oreal product, or she’ll speak about it in any kind of interview for the next couple months.  Last year around this time, it was Emma Stone and Olivia Wilde for Revlon.

I admit that I get a bit cynical about spokesmodel campaigns because I feel those kajillion-dollar contracts seem to discourage these women from being truthful about what products they really use and really enjoy.  I mean, prior to being paid enough money to support all of Indonesia for a year by Almay for her current spokesmodel campaign, did Kate Hudson really love and use their products?  Somehow, I think being paid what I’ll probably make in thirty years of work for a single two-to-three-year contract makes that drugstore makeup and box-dye haircolor a lot more effective to you- yeah, I’m looking at you, Gwen Stefani.  You will literally never convince me that the QUEEN of platinum blonde hair regularly uses L’Oreal Preference box dye for those icy perfect locks of hers.  Never.  And isn’t Olivia Wilde some kind of proud vegan?  Why, oh why, would you agree to be a spokesmodel for Revlon, a brand that (like most drugstore cosmetic brands) is notorious for animal testing and nowhere near natural in it’s ingredients, if you’ve claimed to adopt such a lifestyle?  Oh, they’re paying you my dad’s salary times a thousand to do it?  Yep.  Sounds like a good time for looser vegan standards to me, too.

Anyhow, for as much as I bash on drugstore products and all the advertisements they come with, it still is exciting to see them make their debut.  A junkie is a junkie is a junkie, and I’ll come clean and say if I were extended a whopper of a contract to grin and bear it for Maybelline, I’d take it (or at least, with what I’m currently earning I would).  I was wandering through a Walgreens earlier today and it looks like January came early (which is no surprise, since, again, everything is early in these spheres)!

As you can see here, we’ve got all kinds of newness coming from the folks at L’Oreal.  New hair products for the EverCare line, new shadow palettes, all sorts of stuff.  And there’s Lea, peeking out from behind the Telescopic Shocking mascara!

Here’s what’s new from Revlon.  I think they’re trying to make a pretty big deal out of that Nearly Naked makeup line, as Revlon threw a giant launch party for it complete with an appearance by Emma as its spokemodel. 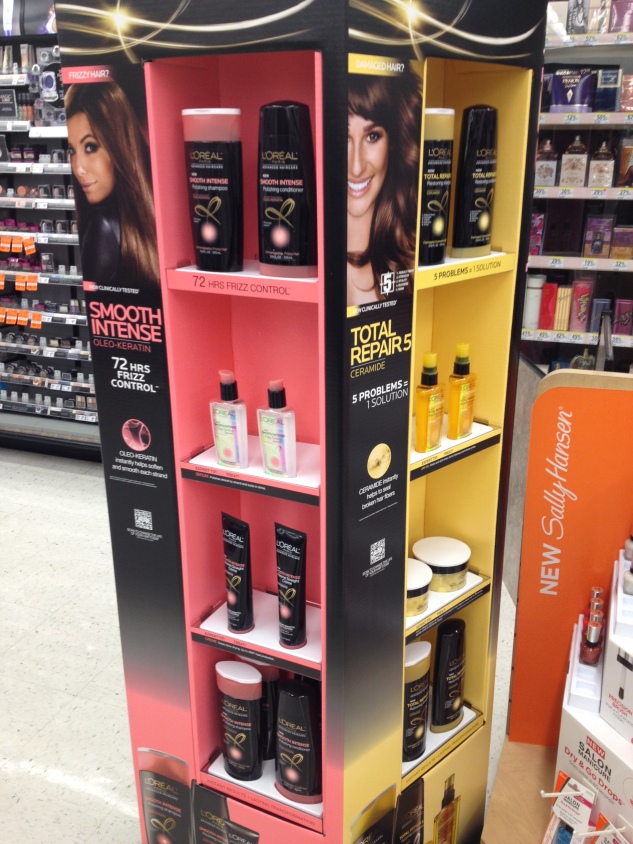 Additionally from L’Oreal- A huge new line of hair care products (and not just in addition to the sulfate-free EverCare line).  This line is simply called L’Oreal Advanced Haircare, but there are five types of product families within it to suit all kinds of needs (like dryness, color treated, etc.).  And there’s Lea’s face again!  I doubt these items will match up to salon quality or beat more natural care for your hair, but time will tell if any of these products give effective results and become household staples.

I took a shot of all the five families in this line except for the kind tailored toward “dry” hair (and it’s minty-green packaging).

So as 2012 winds down and 2013 begins to take the stage, be anticipating all these items to appear in your local drugstores very soon.  And just learn to deal with the lies of Halle Berry saying that Revlon has made her “photo ready”, while failing to credit her skincare routine that costs the price of Brazil with tax and consists of a moisturizer made with one drop of blood from every endangered species on the planet and hand-crushed tea leaves from the top of Mount Kilimanjaro.  And something called “Adobe Photoshop”.  xo, MR