It’s been a while, but that’s okay. Busyness and work leave little time for blogging. However, my eyes are never too busy to miss the awesomeness that shows up on the red carpet in the form of seriously bonkers eyeshadow. I mean it people- this holiday season, PLEASE stay away from the neutral tones. If it’s Christmas and I see you wearing basic eyeshadow, I might get mad. ‘Tis the season to be purple. At the very least.

Let’s take a tour of possibilities, all of which have occurred within the last two months.

Dark, navy eyeshadow is my fave. I mean it. If I could do my wedding all over again, I’d wear a mermaid silhouette and do a smoky navy eye. My preference is a matte finish over a sparkly one, but who cares. You can thank Carol Gonzalez for this magnificent job well done on Kerry Washington. My guess is she used a Pat McGrath Labs palette.

I feel like the only eyeshadow color we see less than green is canary yellow. Yellow – not gold – is so under-appreciated! Pati Dubroff created this look on Margot Robbie using a couple MAC products, including Chromaline gel/cream shadow in Primary Yellow. I love that it’s applied all the way up to Margot’s brow for a really modern take. 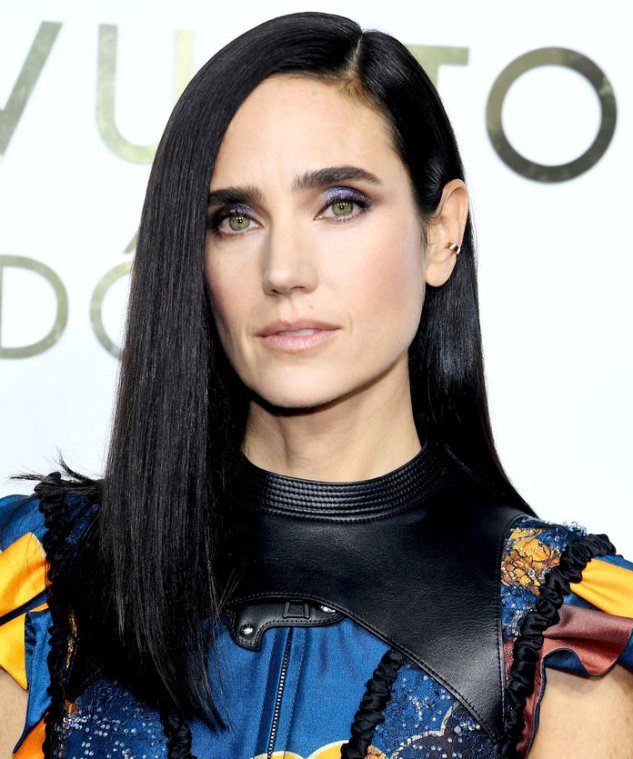 Jennifer Connelly is another example of the wonders of blue eyeshadow. It’s not just for pageant girls, people! And it comes in an infinite variety of tones. Kay Montano used a  silvery-but-vivid blue on Jennifer’s inner eyelids here, with what look like purple tones on the outer lid and around the rim. I love how her nearly blue-black hair makes the blue shadow stand out even more, especially with the dress. Coupled with the brows and everything else left bare, we’ve got perfection.

Winged eyeshadow! Nothing says, “My allegiance lies with Imperator Furiosa” quite like winged, black eyeshadow. This is one of my favorite likes to try and recreate on myself, personally. I love looks that feel strong and ferocious like this, especially when paired with sleek hair. Jillian Dempsey has consistently turned out a killer smoky eye, typically on Kristen Stewart. This turned out perfectly; the blending is smooth as a milkshake. 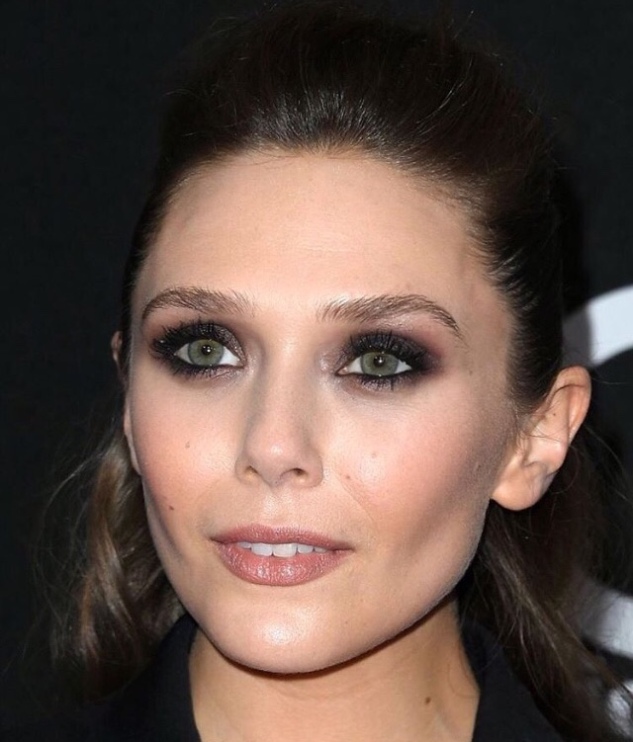 And because you know smoky eyes are pretty much my kryptonite … here’s another one! Georgie Eisdell managed to pull off what’s probably the most flawless version of the iconic look I’ve ever seen. I mean, ever. This is the makeup I’d die in. There’s such an incredible depth to Elizabeth’s shadow, with what could be four different shades used. Georgie used exclusively Chanel products to create this look. She doesn’t name which eyeshadow palette it is, and it might be one that hasn’t come on the market yet. Nevertheless, I’ve been searching like a crazy person.

What do you plan to do this year for holiday makeup? Any palettes or products you plan to try? Let me know in the comments! xo, MR

This is my first post on makeup I’ve done on myself.  Alright, I see that’s somewhat inaccurate.  I should say that this is the first post of makeup I’ve done on myself for a photo shoot (and that’s not many).  It’s easy for me to be overly critical of my own work, and especially work from over a year ago because … I don’t know … something about this year kind of just raised my standards on makeup all around, and it probably has something to do with the fact that I’ve started doing bridal makeup for others and the pressure’s gone from cat-sitting-on-my-chest to elephant-sitting-on-my-chest.  I’m happy to say that I’m still pleased with what I did for my wedding makeup, and I’ll post on that later.

But for this post, I once again invoke the magical name of Bethany Carlson (sorry for the wizard-y phrasing … too much Harry Potter lately).  Nearly a year ago, Bethany developed a concept for a mock wedding that she wanted to shoot, and she asked my husband and I to model for her.  The main point was to shoot in the Nevada desert around 4:00 pm in order to catch the perfect light of the “golden hour”.  The styling of the shoot was something we weren’t entirely sure of to begin with, but we knew we wanted to go for something dramatic if it was possible.  I set out to find some kind of white dress (any kind of wedding-type dress, really) that would hopefully set the tone for the shoot. 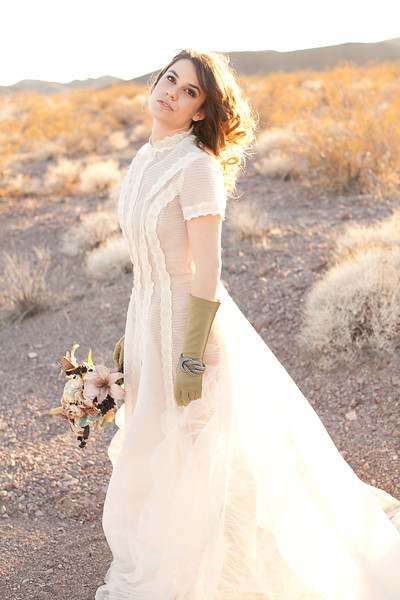 I’d really wanted to find a dress with character for the shoot, and upon trying it on and realizing that it nearly fit (being a little big in the waist), I figured I probably wouldn’t happen upon such a unique item at this kind of price, with this kind of close fit, ever again.  I was sold (and to actually buy the dress would’ve only cost an extra thirty bucks!).  Bethany was able to go all-out with prop styling once she’d seen the dress, and the shoot’s aesthetic developed into an almost Downton Abbey-inspired look with some antique Western elements happening (and she even had invitations created!).  Now, I know the dress looks all soft and dainty in the photos, but believe me, it was like wearing a couple of tumbleweeds stitched together.  The thing itched like fresh-cut grass on your freshly-shaven shins.  Some of the lace trimming was tearing, it looked more yellow than any kind of ivory in a few spots, and it smelled old.  It also was lacking any lining or slip, so I had to find a flesh-colored cami and pair of dance shorts to wear beneath it (and I wanted you to be able to see through it more or less, because sheer was going to be big for that spring).  But let me tell you, that dress just seemed to come alive in the desert, in that light.  Bethany found gloves, put together a silk bouquet in sync with the color scheme of the desert, and things just happened.

Hair and makeup were all on my end, and I was more than excited about it.  Now, I have to confess that for my hair, I tried a new technique I’d learned that proved a bit ambitious.  I blew my hair out straight for the most part that morning, and then proceeded to take 1-2 inch sections of it and twirl them up into pin-curls all around my head.  I secured them with bobby pins and light hair spray, with the intention of leaving them in for 45 minutes.  They were in for nearly two hours.  My bad.  So, you may feel that my hair looks a tad wonky from some angles, but I tried to just do my best Janice Dickinson and werk it.  A couple sections of hair just weren’t able to relax much because they’d been pinned for too long, but that goes for most of us anxious people- Stay wound up for too long, and you’ll find that you’re never able to relax again.  But honestly, it didn’t really matter.

In doing makeup, I learned the real reason why celebrities have a team of artists there for every shoot- That junk’s gotta get reapplied every five minutes for it to even look remotely similar to how it originally looked.  But did I touch up at all once we got going on the shoot?  Nope.  My bad.  That was a major note-to-self:  Despite however much you may have put on to begin with and despite whatever Armageddon-strength primer you use, it will wear off and you’ll need to touch-up.  How can you get your makeup to last all day?  By reapplying it every three hours, that’s how.  And we weren’t dealing with heat or wind or hostile elements of any kind out there.  In fact, it was decently chilly and still as death.  Seriously!  This is where the mob takes you to put you out for a dirt nap!  See those mountains behind me?  Know where that is?  It’s nowhere. 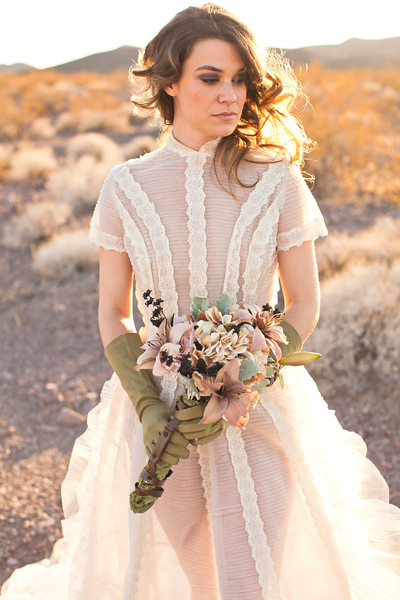 For my face, I wanted a navy-blue smokey eye with basically just bronzer on the cheeks.  I can barely remember everything I used for this shoot because I kind of flew by the seat of my pants, but I do know I used an awesome deep navy shadow by Urban Decay called Perversion, and for bronzer I tend to use nothing other than NARS’ Laguna.  I didn’t use false lashes (my bad), but there was plenty of MAC Kohl Liner in Smolder.  Yes, I’m lookin’ at you, Glamberace.  And I seriously couldn’t tell you what I did, if anything, to my lips.

Bethany and her husband literally piled a room full of furniture in and on top of their car for the drive out to our desert spot.  The two of them found and brought along table settings, chairs, DOORS, everything.  Oh, and we were packed in that car too.  I can’t describe what the whole experience felt like other than Wow … we’re doing this? … we’re doing this … we DID this!  It was literally a game of chasing the light and watching it all come together.  It was thrilling.

I loved everything about this.  Bethany was on her A-game (though I have yet to see a shoot of hers that presents otherwise), I felt proud of my own styling (even if it wasn’t perfectly executed), and my husband was looking all kinds of old-timey handsome.  And look at the prop concept Bethany designed!  Again, I really can’t encourage you enough to take a peep at my dear friend’s work, and who knows?  Maybe one day you’ll find yourself all alone in a desert getting shot.  Hopefully it’s just not by someone named something like Toothpick Charlie or Luca Brasi.  xo, MR

All photos in this post are credited to Bethany Carlson Photography.  For more of Bethany’s work and for more of this shoot, visit her site/blog at http://www.bethanycarlson.com.