It may be the middle of August, and you may still be wiping that sweat off your sunburned brow, and you may still be pretending that it’s summer, but in reality … well, in fashion publication reality … we have officially turned the corner into FALL 2012. Where’s my evidence for this? Come Friday, all newsstands will have these lovelies happily perched on them, and they are the September issues.

These babies are the fattiest and most important issues of the year. People are frequently baffled as to why September issues are so ridiculously large. Your briefest answer lies in the fact that September ushers in the new season of fall fashion. We transition into a completely different way of dressing in the autumn, and designers often have had a lot of new and exciting ideas to showcase for it during the previous fashion week. Everyone is excited to show off the season’s best trends, all while coming together to see what’s lined up for the next spring. Spring brings a seasonal transition as well, but it’s never met with the same hype. Additionally, designers often take somewhat of a break over the summer, and so September is highly anticipated as a sort of ‘Back to Work! Let’s kick it into high gear!’ time. I like to think of it as the true ‘new year’ in the fashion and fashion publication world. In fact, you’ll notice that January issues are usually the slimmest of the year. 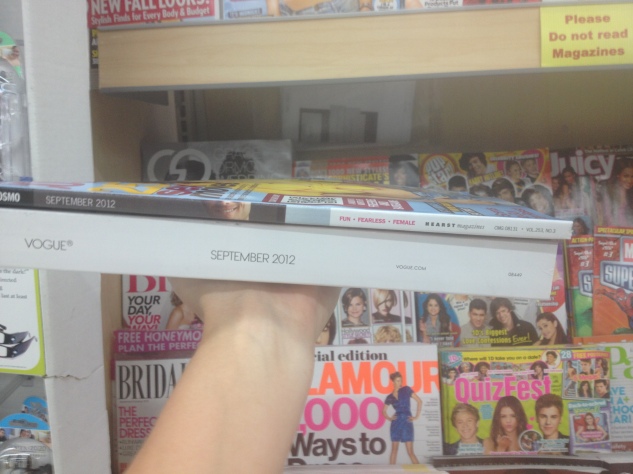 Here’s a picture of the fatty fat McFatterson September issue of Vogue for this year. I picked up the thing this afternoon and let me tell ya, it’s a beast. It is no joke. My arm shook as I held the thing up to take the stupid picture (and that’s silly Cosmo there placed on top just to give you a small reference for size). Lady Gaga is on the cover, which is a relatively safe choice considering she’s been on the cover of Vogue before and it was the year’s best-seller. No risks there.

I am personally looking forward to trying to pry the obese monster that is InStyle September 2012 out of my mailbox tomorrow, with Jennifer Lopez on the cover. It’s their biggest issue ever (fashion publication achievement unlocked). Seriously, anyone got a monkey wrench? My mailbox may choke to death; there’s no room for Jenny-from-the-block’s big booty in that mailbox!