I used to think I really loved makeup.  Well, I mean, I do love makeup.  A lot.  I always thought I loved it more than most people.  However, within the past couple years or so, makeup as we know it has changed forever in some radical ways.  And in light of this, I have to say that my love for makeup as we know it now has become more of a journey than a certainty.  Let me provide a little background.

The rise of the Youtube video blogger in the 2000’s transformed the world of makeup through the power of shared knowledge.  Suddenly, everyday women all over the world were able learn and practice difficult and elaborate techniques thanks to thousands of tutorials posted by other everyday women all over the world.  Some video bloggers have reached mega-celebrity status like Michelle Phan and Jaclyn Hill, with their worth now in the millions.  Instagram offered another avenue for sharing makeup knowledge, along with its glow-giving filters and other fancy apps with capabilities of blurring and retouching our complexions.

Then came the variable with the most impact- Kim K and her Kontouring Kingdom.  Suddenly the world of makeup was launched into the stratospheric heights of what once seemed impossible.  Social media took quick notice, and now you can’t scroll through your feed once without noticing a woman showing off that signature Kardashian-Jenner look: contoured cheekbones, a contoured forehead and chin, golden-yellow highlighting thanks to some type of banana powder, shimmery, pearlescent highlighting across the forehead and cheeks, a contoured and highlighted nose, immaculate eyebrows, full, voluminous lips sporting a matte, liquid lipstick, layered eyeshadow with a flawless cut crease, thick, perfectly-drawn winged eyeliner, and dramatic false lashes.  Throw on a couple filters and there isn’t a flaw in sight.  It doesn’t exactly look natural either, but in this new phase of makeup artistry for every woman, more is more.

I’m not consistently drawn to this maximalist kind of makeup as most know; I find myself more inspired by the work of celebrity makeup artists as opposed to what I see on Instagram (with folks like Mario Dedivanovic and Joyce Bonelli excepted).  However, it is fun to think about all the possibilities in your train case after watching a tutorial on the most elaborate smokey eye you’ve ever seen.  Even if something isn’t quite for you, it can still be inspiring. 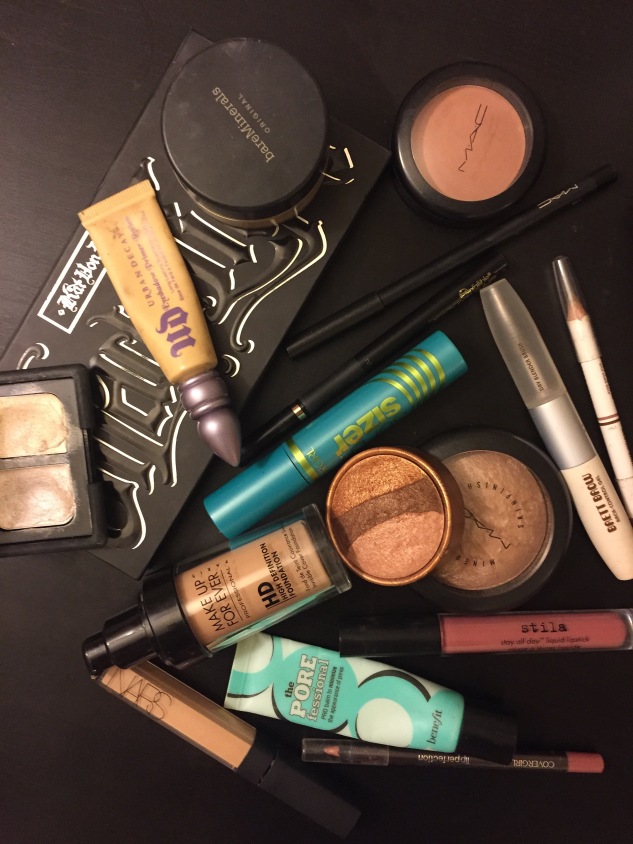 And so, I decided to have a little fun last night and just go for more.  And man, did I not feel like myself.  This was no single wash of eyeshadow topped with a bit of kohl liner and mascara like I usually do for a night out or something.  I followed the formulas of multiple Youtube bloggers that I’ve watched and went through every step in what felt like a game of human paint-by-numbers: mattifying primer, liquid foundation, powder, concealer, contouring, banana powder, illuminating powder, blush, shadow primer, layered eyeshadow (four shades), eyeliner, mascara, false lashes, lipliner, and liquid lipstick.  Everything I used is pictured above, except for the false lashes (which were just accent lashes by Ardell).

And none of the following photos have any filter on them.  I’m simply standing in front of a soft lamp for the ones featuring the finished look.

BAM.  Crazy!  The difference is almost laughable, isn’t it?  It probably would’ve helped to give a bit more of a smile in the photo on the left, but hey, for dramatic purposes we’ll leave it as it is.  Not hiding the bangs under a beanie helps as well, but when it’s -2 outside and you’ve just arrived at work after battling the oppressive elements, you’re probably going to put your bangs in a beanie too.

But it didn’t turn out too bad, did it?!  I have to say that I liked how I looked in most every picture I took, which isn’t typical for me at all.  That is one thing that this kind of makeup can do well- photos are suddenly not so intimidating.  You just have to find your favorite angles that show off the makeup best. 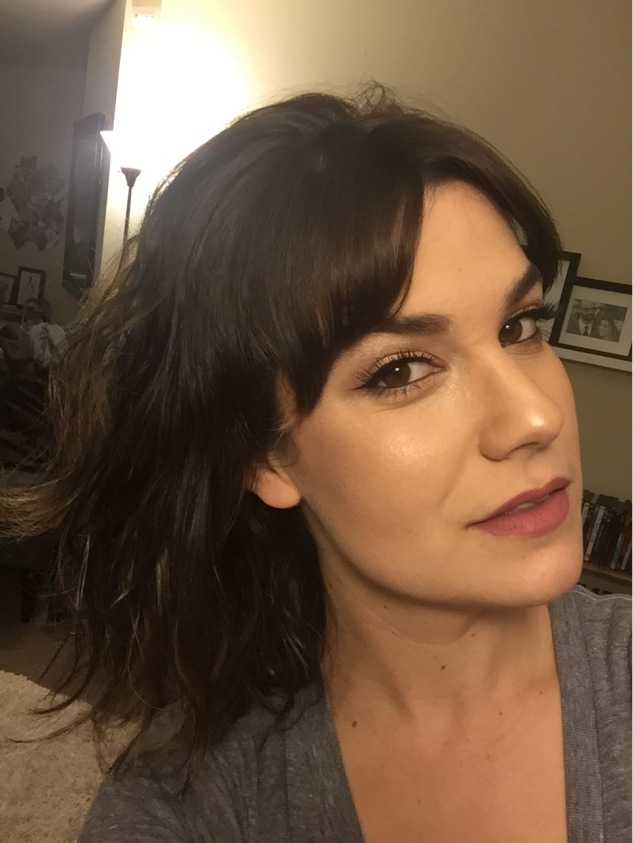 Also, understand that to many women (and men too, from what I’ve seen on Insta), this is still total amateur hour. I did not take things anywhere near as far as some Youtubers or bloggers take them, and a lot of people would probably still consider this a soft, natural look. I don’t, but it starts to become a matter of relativity.  Many people have had countless hours of practice with Kardashian level, “extreme” makeup, and they can do much, much more than me in terms of talent and technique.  This is just one of my first takes on it.

I’m convinced that the one detail that really takes things to the next level is the highlighting on the nose.  It’s what kind of gives you that ethereal, almost plastic look.  The Kat Von D Shade and Light contouring palette is also key- I really, really like that palette.  I’ve watched several Youtube videos on how to get the most out of it, and it’s amazing what you can do to the shape of your face with six simple shades.  I tried to do the exaggerated lipliner for that crazy Kylie Jenner effect too, but the fact of the matter is she gets lip injections.  There are complicated contouring and highlighting techniques that can give the illusion of much larger lips, but that tends to require a couple shades of creamy concealer and I only have my match shade.  I just tried things with nude liner and liquid lipstick.

The liquid lipstick I used on my lips was also hard to work with outside of the natural lip line because once it sets on your skin, it dries within seconds and doesn’t budge.  You can’t make any adjustments or changes.  It’s seriously high quality stuff, but you do not wear it for comfort or ease of application.  I used Stila’s Stay All Day Liquid Lipstick in Patina.  You might be able to tell that the lip lines got a little smudgy because I tried to rub the lipstick off in some spots, but it didn’t work.  I basically had to go to bed with this stuff on and it is so unbelievably drying.  Not exactly the comforting, moisturizing formula you’d use in weather with a wind chill factor of -15 degrees.

No filters here, I promise!  Just in front of a lamp (especially because it was night and there was no natural light to be found).  I’m under a bright light on the left side too, though.

I have to say, the transformative power of Youtube-inspired makeup is undeniable.  It works, especially in terms of making you feel glamorous and photo-ready.  However, it’s not a realistic everyday look for me and my life.  Now that I know I can do it though, maybe I’ll take a stab at it more than once a year.  I just wouldn’t want this to ever feel like the norm because that can take the fun and novelty out of it.  For now I’ll just be sure to keep washing my face and taking good care of my eyebrows.  xo, MR